Drop the Case against Marissa Alexander

DEMAND THAT FLORIDA OFFICIALS DROP THE CASE AGAINST MARISSA ALEXANDER!

Last week the Florida Appeals Court overturned Marissa’s conviction because of extreme errors in the case: rather than being presumed innocent until proven guilty, Marissa’s persecutors put the burden of proof on her. This is opposite to the most basic principles of the U.S. legal system.

Call, write, fax or email State Prosecutor Angela Corey, State Attorney General Pam Bondi, and Florida Governor Rick Scott to demand that they drop the case now. Marissa Alexander did no wrong. Do not subject this domestic violence survivor and mother to another trial. This innocent woman has already served three years.

Here is preliminary information about how to contact these officials. More information and sample letters will follow soon. But please take action now and start spreading the word now!

17-year old, unarmed Trayvon Martin was shot and killed by self-appointed, unofficial “neighbourhood watchman” Zimmerman who has a history of stalking innocent young black boys. Zimmerman is over 100 pounds heavier and 11 years older than Trayvon who was walking away when Zimmerman began to chase him. Trayvon was returning to his dad’s girlfriends house from the local store having brought Skittles and some Ice Tea. He was on the phone to his girlfriend.

In an almost incomprehensible on-going injustice, the police have allowed Zimmerman to walk free, not even arresting him, as the murderer has admitted to shooting dead the innocent teen but has claimed “self-defense” saying he felt threatened and describing Trayvon as “suspicious” during his 911 call. Under the controversial “Stand Your Ground” laws in Florida, this is apparently all a murderer needs to say to be completely let off. But how does someone half your age and half your size who is walking away from you threaten you? Since when did wearing a hood when it is raining become a justifiable reason for murder? Why did police do a “background check” on Trayvon as he lay dead on the floor but not on the murderer Zimmerman? Why was Trayvon’s blood tested for alcohol and drugs but not Zimmerman’s? Why did police “correct” witnesses who said Trayvon lay screaming for his life?

As the 911 tapes are released and more witnesses come forward to speak to the media, it is increasingly apparent that this was a hate crime, an act of racist violence, which has been defended by a racist police force who seem to be actively protecting the murderer.

Community rallies are taking place and media coverage is growing as mass public outrage also increases. There will be a “Million ‘Hoodie’ March” tonight (Wednesday 21/03/12) attended by Trayvon’s parents in NYC to demand an end to racist profiling. People who can’t attend are being asked to upload photos of them in a hoodie to social networking sites show support. UPDATE:  Trayvon protest in Oakland SF Trayvon’s parents at protest in New York

for info on what you can do, events, people to contact & how to spread the word.

White People, You Will Never Look Suspicious Like Trayvon Martin

The crime of killing a black person still is not greater than the crime of being black.

Trayvon Martin and the fatal history of American racism

REPEAL THE STAND YOUR GROUND LAWS 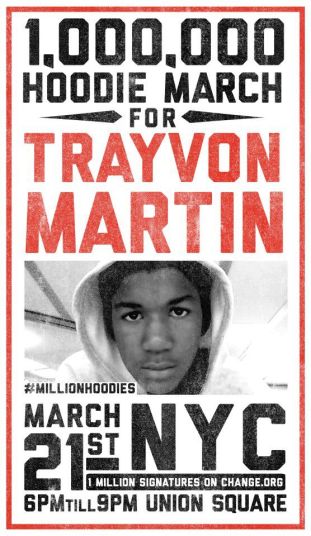 Sisters of Resistance are huge fans of Lowkey. Soundtrack to the Struggle is, in our opinion, easily the best UK hiphop album of 2011 and we were honoured to host a night of his album tour. Whether you get the album via download or hardcopy, you will definitely not regret it. Lowkey’s big boy bars, well produced beats, moral integrity, political consciousness and dedication to fighting for equality and justice are inspiring and uplifting. He stays close to the original objective of hiphop employing it to “empower the powerless” and to provide a vehicle of expression for the voiceless.  Lowkey has taken an active stand against British imperialism and the war machine, criticising the so-called “war on terror” in Terrorist?, exposing and condemning the UK military industrial complex in Hand on Your Gun. He recently wrote a Guardian article speaking out about police racism and the criminalisation of hiphop.

In sharp contrast, Westwood lacks even the most basic understand of the history of hiphop and he has actively promoted the military occupation of Afghanistan. His insensitive and unsuccessful attempts to imitate, steal or misappropriate a mainstream version of hiphop culture, despite his evidently rich, white and privileged background, are cringeworthy.

Below, we have cross posted an excerpt from Lowkey’s article in the brilliant Ceasefire magazine  (@ceasefire_mag) explaining why he refused to appear on Westwood’s show.

Lowkey rightly focuses on Westwood’s involvement in war propaganda but Sisters of Resistance would like to briefly share an anecdote which confirms that artists with moral integrity such as Lowkey have no place in the company of such morally bankrupt careerists as Westwood. Many years ago, I attended a Westwood event at a club in East London. Westwood spent the night screaming “b*tch” and “wh*re” down the microphone in a desperate and unsuccessful attempt to create an image of street credibility and gain acceptance from the predominately black crowd. The “joke” began when Westwood offered free champagne to the first woman to present herself to the stage. When no one responded to his request, Westwood repeatedly begged for a woman to come to the stage simply to pick up some giveaway champagne. When a young black woman did eventually approach the DJ booth, Westwood played the then popular (I said that this was a long time ago) Ludacris song “Ho.”For the rest of the evening Westwood spewed racist and sexist hatred on the mic creating a strong atmosphere of misogyny in the nightclub.
Westwood is only interesting in promoting himself. Many have never forgiven him for his delayed response to grime music and homegrown UK talent, refusing to play or promote it for many years. And as Lowkey makes clear, Westwood’s promotion of the military occupation of Afghanistan is inexcusable and a further reason for true hiphop heads to completely ignore the increasingly irrelevant, politically offensive BBC DJ.

Lowkey: Why I had to say no to Westwood TV

Earlier this month, Lowkey, one of the UK’s leading hip hop artists turned down an invitation to appear on TimWestwoodTV, the influential YouTube channel hosted by Tim Westwood, arguably UK Hip Hop’s biggest name. In an exclusive piece [for Ceasefire] , he explains why.

Being not only a Hip Hop artist but a life-long fan of the genre, I have, like many others, been very familiar with Tim Westwood. As a young boy, I remember listening to his show on Capital FM and have since spent the majority of my almost decade-long musical career trying to get a spot on his BBC Radio1/BBC 1xtra show. For a long time, an appearance on the show was – and, to some extent, remains – the benchmark for any aspiring Hip Hop or Grime MCs. For many rising artists, you were only considered relevant if you had been acknowledged by Westwood. Moreover, whenever Westwood chose to champion a particular artist, throwing his weight behind their career, big success was almost guaranteed.

Yes, his clout as the self-described “gatekeeper” has declined over the past three years, due to the rise of independent media like SBTV and Grime Daily and, more recently, the progression of Radio 1’s Hip Hop DJ Charlie Sloth. Nonetheless, turning down an invitation to appear on Tim Westwood TV, as I have done this month, was not a decision I could take lightly.

As far as I am aware, Tim Westwood’s first visit to the occupying military base ‘Camp Bastion’, in Afghanistan, was in early February 2011. In contrast to his later trip in May 2011, this one seemed to be in a more personal capacity, he had remarked of the British troops stationed there that they were “really making a difference to the world” and that he felt he had a “moral duty to come out”. He also vowed to “come back with Radio 1”. And come back he did. […] Why should BBC Radio 1Xtra listeners be subjected to this propaganda?  […] The reality is that the MOD and the BBC need to sell an increasingly unpopular military adventure to the youth of this nation, so they use a character of dwindling relevance by getting him to broadcast his live show from the heart of the occupation itself.

In light of the current #UKriots, we will be posting an in-depth article tomorrow. In the meantime, let us direct our energies and anger at those who caused the currect economic crisis and thus are directly responsible for the unrest on the streets tonight.

US Day of Rage is a mass mobilization scheduled for September 17th in New York that will bring people to occupy Wall Street and turn it into the next Tahrir Square. The event page is here: https://www.facebook.com/#!/event.php?eid=144937025580428 Concurrent events are being planned in London, Spain and Cairo.

Please help by showing your support for the event by spreading the word across Facebook and Twitter. Let the world know that  US citizens are united with global struggles against police brutality and political repression, and ready to speak truth to power.