From the US comes another sickening case of racist violence and murder. This time it is a young black woman, Renisha McBride, a teenager who was murdered while seeking help after a late-night car crash in a white suburb of Detroit.

From this article by journalist Rania Khalek, who broke the story:

Dearborn Heights police initially told McBride’s family that her body was found dumped near Warren Avenue and Outer Drive, but that story quickly changed. Not only are police refusing to release the identity of the man who shot McBride, they’re now saying she was mistaken for an intruder and shot in self-defense on the homeowner’s front porch. Even if that’s the case, and there’s reason to believe it’s not, the shooter still failed to call 911 after shooting an unarmed woman in the head, instead leaving her there to die. Does that sound like the behavior of a law-abiding gunowner who made a tragic mistake?

Writer and filmmaker Dream Hampton and Detroit hip-hop artist Invincible organised a rally for justice for the slain teenager, whose conduct on the night of the shooting is being questioned in accusations by the police and the media. This Huffington Post article describes the rally, and Hampton’s critique of the blame-the-victim response:

“This is what happens, again and again,” Hampton said, invoking the killing of unarmed Florida teenager Trayvon Martin last year. “It’s kind of textbook. We’re able to break it down in the public media, when it came to Trayvon, the criminalization of the victim, of the corpse. Look, he got a C, look, he was a teenager who smoked pot, he had a sugar problem, he liked Skittles. … It becomes the criminalization of the corpse. … The police are supposed to be advocating for victims.”

Black feminists on Twitter have called out mainstream white feminists for not engaging with the Renisha case. Intersectionality, or the interaction of multiple dimensions of oppression, is as important to remember in this case as ever. If Renisha had been a white woman, we suspect there would have been little chance of her being murdered when seeking help on a stranger’s porch.

As of today, Ranisha’s murderer, who first claimed he thought she was an intruder, later changing his story to “the gun discharged accidentally“, has not been arrested, and his identity is being protected. Due to a stand-your-ground law in Michigan, it is possible he will not be charged. The absurdity of her murder, and the official response to it – for her actions to be questioned, not those of the man who killed her – illustrates the continued calamity that is racialized violence in the United States, supported by a legal structure that systematically denies justice for victims whose bodies are black and brown.

Drop the Case against Marissa Alexander

DEMAND THAT FLORIDA OFFICIALS DROP THE CASE AGAINST MARISSA ALEXANDER!

Last week the Florida Appeals Court overturned Marissa’s conviction because of extreme errors in the case: rather than being presumed innocent until proven guilty, Marissa’s persecutors put the burden of proof on her. This is opposite to the most basic principles of the U.S. legal system.

Call, write, fax or email State Prosecutor Angela Corey, State Attorney General Pam Bondi, and Florida Governor Rick Scott to demand that they drop the case now. Marissa Alexander did no wrong. Do not subject this domestic violence survivor and mother to another trial. This innocent woman has already served three years.

Here is preliminary information about how to contact these officials. More information and sample letters will follow soon. But please take action now and start spreading the word now!

“We must be concerned not merely about who murdered them…”

Justice for Trayvon Martin. Down with white supremacist capitalist patriarchy.

Emily L. Hauser - In My Head

Why We Stand with Rachel Jeantel 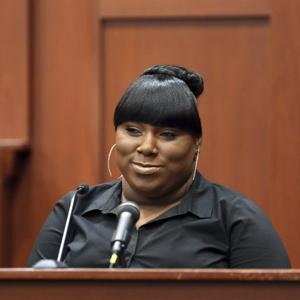 Christina Coleman at the Global Grind has written an excellent article on the racism/classism that is skewing the portrayal of Rachel Jeantel and her testimony in the Trayvon Martin murder trial. Coleman writes:

And Khadijah Costley White has written a moving open letter, published at Role / Reboot, that both recognizes and celebrates Rachel’s resistance while linking her treatment by the prosecution and the court to the legacy of intersecting racism and sexism experienced by black women in the US. She writes:

“You exemplify, in your girth, skin tone, language, and manner, a refusal to concede. You are a thousand Nat Turners, a quiet spring of rebellion, and some folks don’t know how to handle that.

In truth, you’re part of a long legacy of black women so often portrayed as the archetypal Bitch, piles of Sassafrasses, Mammies, and Jezebels easily dismissed, caricatured, and underestimated. For black women, in particular, being the bitch represents our historical exclusion from the cult of true womanhood, a theme traditionally bounded and defined by its contrast to white femininity. For some folks, being black and being a woman makes us less of both.

Don’t forget that in just the last few years, Fox News called the First Lady of the United States “Obama’s Baby Mama,” that a popular radio host referred to a group of college athletes as “nappy-headed hoes,” and that even a gold-medal Olympian wasn’t able to escape physical scrutiny and bodily criticism on the world stage. This rhetoric is bigger than you, older than you, deeper than you—it is not you.

A quick roundup of all the sexist shit that’s been reported around the web recently. If you have things to add, leave them in the comments below.

Trigger warnings for statistics and/or descriptions of rape, violence against women, photos of the Nigella-Saatchi incident, and Action Bronson’s disgusting EP cover.