Yesterday, hip-hop cultural critic Dream Hampton publicly challenged Talib Kweli, her friend and an MC with a reputation for a politics of resistance, via Twitter, saying that she was disappointed with what he had to say about the Rick Ross rape raps issue in a guest appearance in this HuffPo interview. She said although Kweli denounced the lyrics where Ross talks about drugging and raping a woman, and challenged Ross’ half-ass “apology”, his criticism was weak and that he could have – and should have – come stronger. END_OF_DOCUMENT_TOKEN_TO_BE_REPLACED 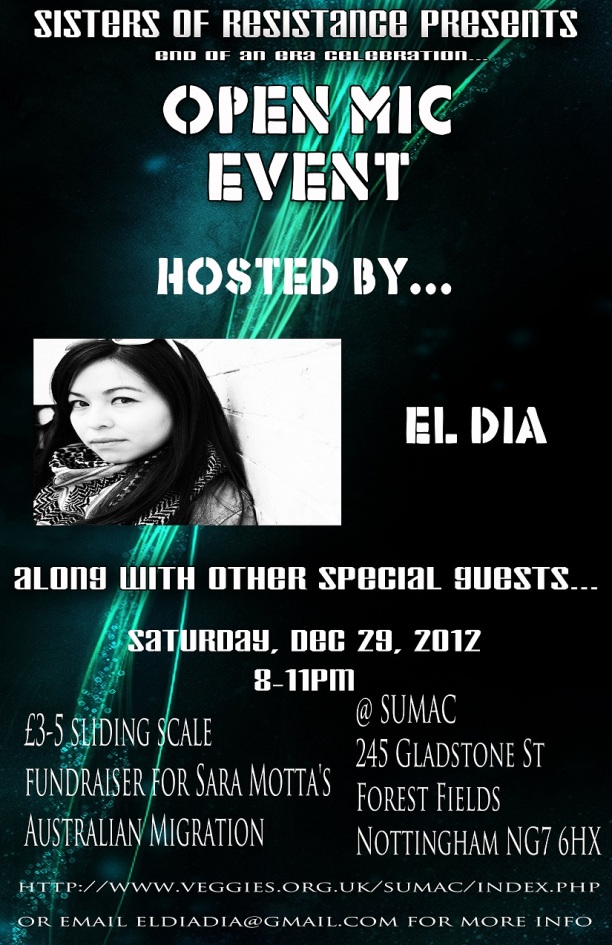 January 11, 2012January 11, 2012/Sista Resista/1 Comment
Add another one to the list…we’ve just caught word that GZA from the Wu-Tang Clan is a vegetarian and advocate of a raw food diet. Not only that, but he’s convinced members of his crew (specifically, DJ Mathematics, RZA, MastaKilla and SoR’s personal favorite, Method Man) to join him in the meat-free lifestyle.

Check out this interview with him on Eater.com where the double-platinum artist discusses raw food and other edibles, being veggie on the road, and recommends his favorite vegetarian spots throughout the US.

Thanks to Kevin Tillman of Upsetting the Setup for posting.

Lowkey’s “Soundtrack to the Struggle” Success in Notts

On Thursday November 10th 2011, over 250 people attended the Nottingham launch of revolutionary rapper Lowkey’s “Soundtrack to the Struggle” album.

The hiphop artist and activist who has traveled to Palestine and whose #1-selling album raises awareness about the arms trade, Islamophobia, the so-called “War on Terror”, international U.S military bases and the hypocrisy of Western leaders including Obama, enjoyed a warm welcome from the Nottingham crowd which included students from both universities and colleges as well as local residents. Fans sang along to lyrics rejecting war and Western consumerism, promoting instead justice, equality and peace. Prior to the headline act, an open mic took place, and local artists such as El Dia (who’s performing at the Sumac‘s Insurrection Hiphop night this Friday) and MC Drago warmed up the crowd with their politically conscious lyrics and cheers of “Free Free Palestine!” Logic, Awate, and Crazy Haze, who accompany Lowkey on tour, were also met with enthusiastic appreciation of their inspiring lyrics. Poet and journalist Jody McIntyre then shared his critical, witty, political poetry to a receptive audience.

The stage was adorned with a large Palestinian flag and graffiti pieces created by 16-year old Lowkey fan Usamah Qaiser and the venue also hosted a diverse range of stalls from local activist organisations and campaign groups. Palestinian Solidarity Campaign was joined by Notts Uni Palestinian Society, Nottingham Students Against Fees and Cuts, Nottingham Refugee Forum, local artists and Veggies from the Sumac who provided tasty samosas and vegan cake along with relevant newspapers and pamphlets such as Peace News. Radical feminist collective Sisters of Resistance politicised the women’s toilets with details of their anti-imperialist, pro-vegan hip-hop blog.

The diverse crowd engaged with the stalls, took flyers and purchased Palestinian scarfs (kuffiyehs) raising money for Palestine and becoming aware of the need for organised resistance. Members of the audience were encouraged to become actively involved in building alternatives to the exploitative, unsustainable system that the featured artists powerfully denounced. With Lowkey’s soundtrack as the inspiration, the successful event saw revolutionary activists and hiphop fans, students and locals alike united in their determination to continue the struggle.

Sisters of Resistance came across this interesting item of cultural expression this evening and would like to submit it for your consideration as an artefact of the current historical moment.